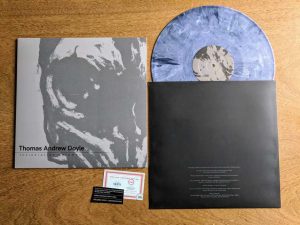 Previously released on CD only,  IC sold out in a matter of days.  This beautiful Sub Pop Records release on special colored vinyl will include updated versions of every original song, in particular “Prognati Ignis Ignis” which has vocals which were not on the previous release. The vinyl release boasts a fresh mixing and mastering treatment for this record release (and digital download cards that are included in the 12 inch). The album features original artwork by Demian Johnston who is a musician (Great Falls, Playing Enemy) as well as being a graphic artist that operates his cassette only label.  Peter Scartabello (Sky Shadow Obelisk) who is the owner of his own chamber music/classical/doom and death metal record label, is a guest musician on two of the tracks.

Incineration Ceremony is the first new new solo work by Thomas Andrew Doyle (TAD, Brothers of the Sonic Cloth, Hog Molly) and is a return to roots of sorts. Spending his formative years in music playing in Jazz clubs while attending school studying classical and jazz music at Boise State University, Doyle comes forth with a symphonic take on what is going on in his head. Spawned from the dark and dreary recesses of Doyle’s psyche comes an immense sound of textures, rhythms and material suitable for film and stand-alone listening, disquieting all who are within an earshot.  Doyle’s entry into the world of symphonic composition is no novice beginner’s attempt. Incineration Ceremony is a musical journeyman’s expression that is genuine, heartfelt, honest, uncompromising and authoritative.  Incineration Ceremony on vinyl is a homecoming of sorts with this release on Sub Pop Records, as Thomas began his professional recording career on the label 30 years ago.  People who are familiar with his previous legendary music catalog should expect the unexpected.