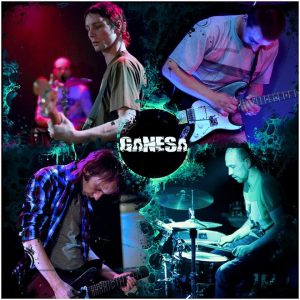 A while back I received an email from Aleksandr from the Russian band Ganesa asking me if I would be interested in mixing a recording for his band. I was impressed that he was writing me in English, which is funny because I sure as hell don’t know how to read Russian text let alone speak it. I can’t imagine the dedication and study time it would take to learn another language especially one so different from Russian. Just learning the alphabet characters would be in itself a challenge to me. That being said, I have been learning to speak Spanish lately as I feel it important to exercise my launguage skills in order to think differently and be able to converse on a basic level with new potential clients here and abroad. After all we do live in a global community now.

As a guitarist I love the 1990s Sovtek manufactured tube amplifiers made at factories in St. Petersburg, Saratov, and Novosibirsk. The builds were solid, built to last and super affordable.  The musical gear that came from them was rugged and durable and had a tone that mirrored the people who made them. But I digress.

Ganesa wears many influences that they filter through the ears and perceptions of four men who grew up in a country half a world away. Hailing from Petrozavodsk, a city on the western shore of Lake Onega in the Republic of Karelia, they have a sound all their own.  This is the first attempt that the band made to sing their lyrics in English and they did well IMO. They have the sound of a band that have grown together in their musical journey and are combining their talents in a way that releases an energy and feel that is greater than the sum of their individual parts. It was a pleasure to work with them from afar and I would love to work with them in person some day. The song that I worked on entitled “Voice” can be listened to and downloaded below. Ganesa are offering this single as a free download. Feel free to download the song and if you care to support their music, you can choose to send along some money for their wares. It’s the right thing to do. So do it.