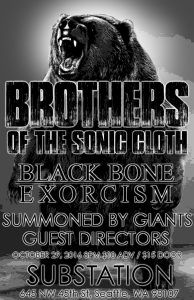 Following up their devastating set in early August at the Dead Baby Downhill 20 After-party in Seattle’s Georgetown neighborhood The Brothers of the Sonic Cloth have heralded the addition of multi instrumentalist Andrew McInnis to add atmospheric glaciers of resonance and texture.  The Brothers are announcing what is to be their last show of the year.  BotSC are headlining a show on Saturday October 29, 2016 at Seattle’s own premier underground venue Substation which is  located between Ballard and Fremont neighborhoods at 645 NW 45th St, Seattle, WA 98107.  There are only 100 tickets available total and they are [available here at this location].

Also on the bill is Black Bone Exorcism who is celebrating their record release, “Crack The Bone, Break The Heart”.  Their debut full-length was recorded, mixed and mastered at Tad Doyle’s Witch Ape Studio in 2015.  Black Bone Exorcism will be unleashing CD versions at the show. For those wanting a copy of the debut on wax they will have to wait to see vinyl copies available worldwide in early 2017 that will be distributed through D.H.U. Records. Also on the bill will be Summoned by Giants and Guest Directors the latter of which just happens to have original TAD guitarist Gary Thorstensen.

Brothers of the Sonic Cloth will spend the remaining months of 2016 and early 2017 preparing the next level of low end power and undeniable rhythmic dimensionalism that was being hinted at on their 2015 self-titled debut on Neurot Recordings.  In the writing of their next recording, the band will be taking new paths and push themselves beyond what they know of their instruments and voices.