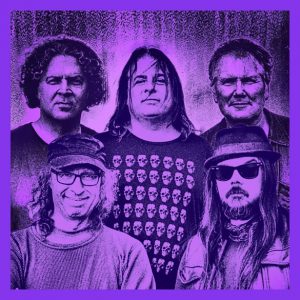 Purple Strange are made up of a few familiar names.
While wandering through France a few years ago, Stroud wrote a batch of songs
about rivers, fake forests and honey-bowl lepers, but he didn’t have a band.
He turned to his drummer friend Matt about recording his songs.
Kurt was asked to play bass, and he asked his friend Ron to play guitar.
Jack was brought in to engineer, and he ended up playing guitar as well.
Suddenly Stroud had a band. They wrote more songs.
One night in the studio when the lights went out during rehearsal,
they discovered that their amplifiers were glowing with a violet aura,
even though there was no electricity. They dubbed the phenomenon Purple Strange.